The railroad tracks that once carried freight cars full of Schwinn bicycles and Hammond organs are gone, replaced with a smooth concrete path for cyclists and soft rubber shoulders for runners.

Weeds that had spread from the embankment of the old Canadian Pacific rail line were yanked to make room for plants, trees and budding flowers.

The constant beeping of construction equipment is among the remaining signals that the transformation of The 606, Chicago’s highly anticipated rails-to-trails project that runs along Bloomingdale Avenue from Ashland to the east to Ridgeway to the west, is almost done.

RedEye went behind the locked gate of the active construction site for a hard hat tour little more than a month before the 2.7-mile trail is set to open June 6.

Lanky light poles and protective guard rails are in place along the trail waiting for residents to run, bike, and walk with their dogs for blocks uninterrupted by street traffic, much like the lakefront trail. They’ll even catch a good breeze on a windy day.

Rarely do Chicagoans get a bird’s-eye view of the city unless they’re riding the CTA or peering out the window of a downtown skyscraper.

Next month, they’ll be able to look down on the city, its neighborhoods and even into some backyards and adjacent homes while perched atop what was once an active freight train line transporting goods to companies such as instrument manufacturers with Chicago factories from 1914 until the early 1990s.

“It’s a pretty unique way to see the city,” said Beth White, director of The Trust for Public Land’s Chicago region office, which is managing the project. “Chicago is such a flat plain. When you come up here just having the 17 feet of elevation gives you a slightly different perspective.”

Prior to construction which started in 2013, the flat trail was a wild prairie with overgrown weeds amid the railroad tracks, a place few people explored, biked or jogged. Now, the land has been reclaimed—though a few remnants still remain like exposed concrete walls with graffiti—and turned into a 30-foot-wide right-of-way trail with publicly accessible ramps every quarter mile at the street level leading to the trail.

“We’re taking a 100-year-old piece of our industrial heritage and repurposing it for another 100 years. This was a rail corridor and now it’s going to be this beautiful park, a living work of art and a transportation corridor all rolled into one,” White said. 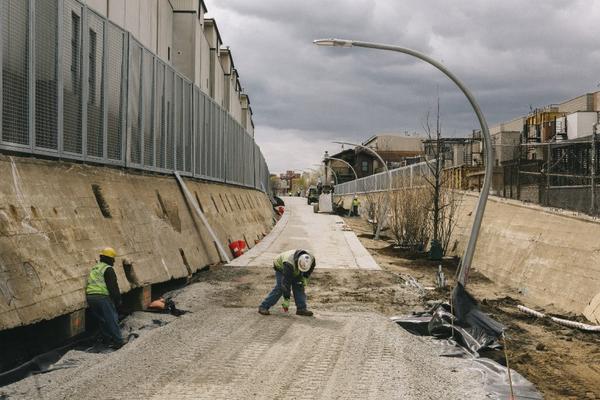 At the time of RedEye’s tour, the concrete path was about 90 percent paved. Unpaved portions with only a bed of white rocks and gravel included entry points at Damen, Kimball and Ridgeway avenues because trucks still were using those ramps to unload topsoil alongside the path. 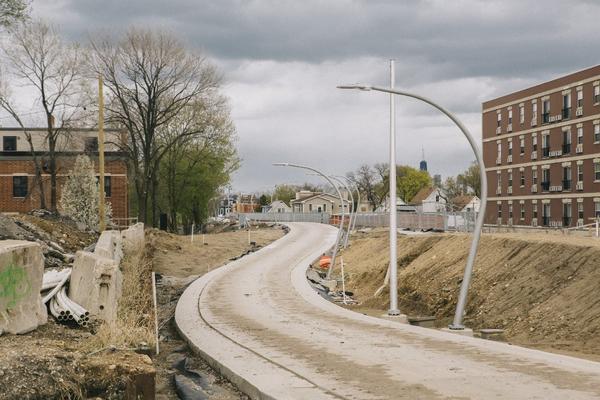 In some segments, particularly on the west side, the 14-foot-wide concrete path meandered like a river and dipped near access ramps so people with disabilities can gain entry. In areas where the path sloped down, the existing concrete retaining walls were exposed on both sides of the trail.

At the time, a stripe still needed to be painted down the middle. A two-feet-wide blue rubber surface will be installed for runners to the right of the trail in both directions.

Shiny stainless steel mile markers were embedded into the concrete every tenth of a mile to tell users how far they have gone. 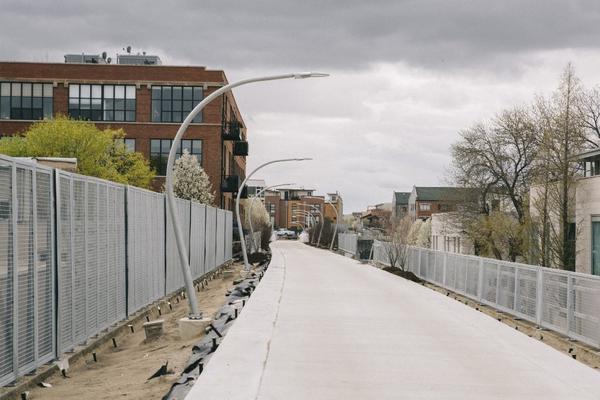 The little tube-like steel railing was swapped out for sturdier steel mesh fencing. In areas where homes butted up against the trail, the privacy panels were 10 feet tall. The intention is to grow vines on the panels to function as a trellis. In other areas, the fencing was four feet tall. 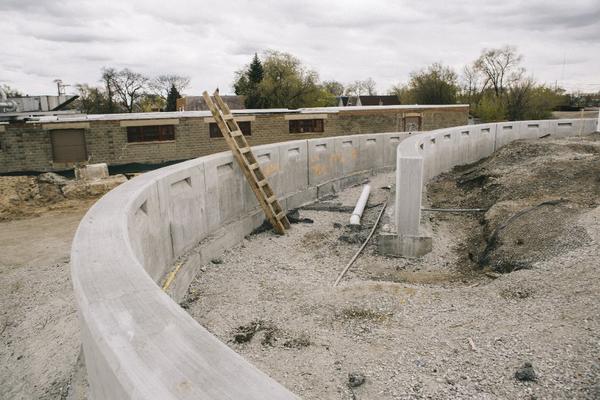 Concrete was poured on the circular shape that is at the western trailhead. But soil was still needed at the site. Currently, gravel and rocks led up to the unfinished observatory, which was inspired by an ancient astronomical observatory in Peru called The Thirteen Towers.

At the top of the spiraling path, people will be able to watch the sun set over the trail and check out a feature called The Blade, which is a metal strip with three notches indicating the winter and summer solstices, and the autumn and spring equinoxes. 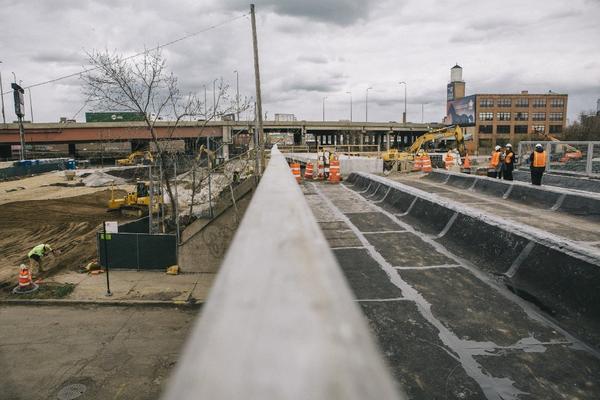 At the eastern terminus of the trail, the plan was to expand Walsh Park north using land that was a park district facilities yard. A wheel-friendly event plaza was supposed to be built.

However, Gov. Rauner earlier this year suspended a $1.4 million state grant that would have refurbished the existing playground equipment, added a water spray feature and the wheel-friendly event plaza. But that will be Phase 2 of the project.

In the meantime, the area has been used to stage construction equipment and will be green space when it opens in June. 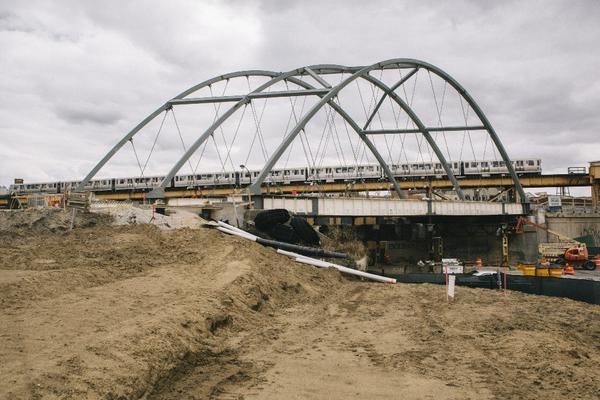 There are 37 bridges along the path.

The new bridge at Milwaukee Avenue features arches and used recycled steel from the old bridge. The bridge was raised to provide additional clearance for trucks before the arches were installed. The bridge cables were tightened so the weight of the bridge is supported by the arch instead of the piers on the street. The center pier was to be removed to improve traffic flow on Milwaukee and lights under the bridge will be installed.

The bridge at Western Avenue was demolished and put in its place was the bridge removed from Ashland Avenue by the expressway. 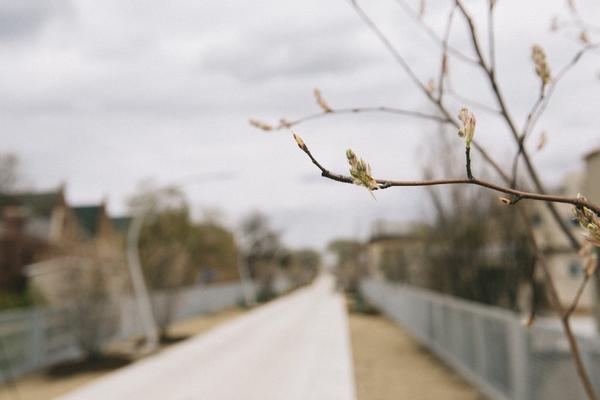 Big mulch bags sat on the side of the trail waiting to get scattered around trees and shrubs. The yellow tips of forsythia plants were budding. The perennials and grass will be planted throughout the summer and the bulbs will be planted in the fall. People also will see serviceberry and lilac in bloom.

Once finished, 1,400 trees will be planted. There were a few patches along the trail where some trees were saved. It will take some time for the trees to grow to their full height which is 30 to 40 feet tall in some areas.

In the areas not yet landscaped, a green ground cover will be laid down for the project opening. 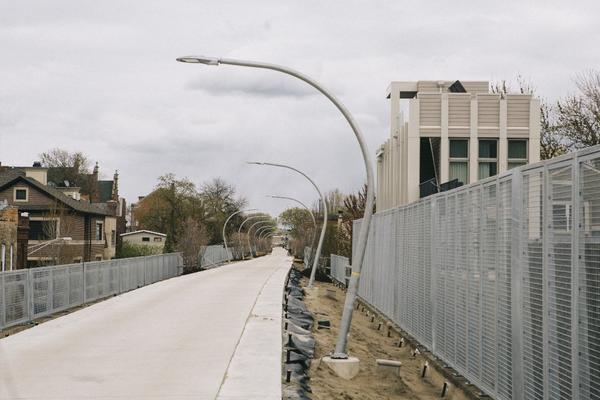 The 180 light poles installed look like weeping willows. They were designed to not obstruct the trail and to shine directly down on the trail so light wouldn’t bleed over and glare into people’s homes. The electrical wires have been laid but some light posts were still missing lamp heads.

Installation of lights in viaducts underneath the trail is underway.

Parks: The trail eventually will connect to six parks. But only four will be open by June 6: Walsh Park, 1722 N. Ashland Ave.; Churchill Park, 1825 N. Damen Ave.; Julia de Burgos Park, 1805 N. Albany Ave.; and Park 567, at Milwaukee Avenue and Leavitt Street. The Magid Factory, which will be included in the second phase of the project, has been identified as a site for a four-acre park at the western end of the trail. Also, an area at Kimball Avenue is planned to be a park site.

Bathrooms: None are planned along The 606 for now.

Dogs: Leashed dogs will be allowed on the trail and in the connecting neighborhood parks. There are two designated dog-friendly areas near the trail at Churchill and Walsh parks. There will be no dispensing stations for dog waste bags.

Resting spots: There will be an art plaza by Churchill Park where trail users can pull away from the path and rest, overlooking Damen Avenue. There will be benches for trail users to look out over Humboldt Boulevard but they were not installed yet.

Cameras: Lincoln Park Zoo will be putting in critter cams to see which animals return to the trail. The small cameras, which measure 5 inches by 3.5 inches by 2 inches deep and enclosed in weatherproof cases, will be placed inside a couple of the existing mature trees for four weeks during each season.

Hours: The trail and its connecting city parks will be open from 6 a.m. to 11 p.m.